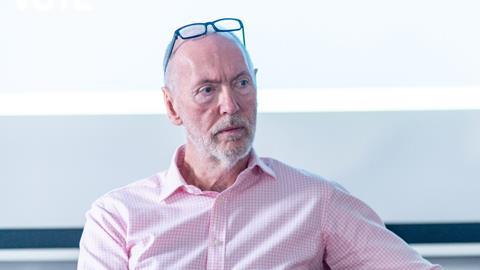 ‘Corporate transparency is a moral and social issue’

Graham Barrow is one of the world’s leading commentators and experts on financial crime and a leading advocate for corporate transparency. Ahead of his appearance at FinCrime World Forum later this month, he speaks to GRC World Forums about why this issue is so important

For Graham Barrow, corporate transparency is not just a matter of effectiveness in tackling financial crime, it is also a matter of fundamental social justice and fairness.

A well-known name, whose popular Dark Money Files podcast with Ray Blake has become essential listening in financial crime circles, Barrow has a bee in his bonnet.

He is passionately setting out why countries across the world should simply no longer put up with corporate secrecy.

“Nobody has to have a corporate entity, it isn’t a prerequisite for anything, it is a voluntary activity that provides extremely useful benefits, one of which is limited liability and the other is tax advantages” he says.

“So, in my view, if you are going to choose to use those advantages it is a quid pro quo, in return, society should reasonably expect to know who you are.”

The billions of dollars a year generated a year through corruption and serious and organised criminality need to be put into the financial system, and corporate commercial banking is the obvious way to do it, says Barrow.

“Corporates are the vehicle of choice for high end, money laundering. And the one way to allow people to get away with that is to is to have completely opaque structures where you can’t see behind the veil” he says

“You don’t know who’s running them or operating them…opacity is the single largest benefit if you want to launder money through corporates.”

For Barrow, registries of beneficial ownership, which are gradually being introduced by many jurisdictions across the world, are key.

If you are going to choose to use those advantages,in return, society should reasonably expect to know who you are

Ideally, these should be open to the public to ensure that everybody can play a role in taking a responsibility to hold companies to account through what he terms the “many eyes” approach he says.

“Who’s responsibility is to report criminal offences? It is everybody’s, you wouldn’t walk past your neighbour’s front door which has been smashed in and not report it. I don’t see that company criminality should be any different. We should have the ability to identify and report it.”

Barrow says that the United Kingdom, with its free to access Companies House register of beneficial ownership information, is leading the way in this area. Luxembourg, which houses many large companies, also established an open register in 2019.

Even the United States has recently enacted legislation to establish a registry, although the information will only be available to law enforcement agencies, not the general public.

Barrow says: “Open registers can be the initiator of criminal investigations, rather than a responder, that’s the difference” Although he is positive about the US plan as a first step that can be built on at later stage.

Barrow is keen to stress that beneficial ownership registries are not a panacea, but they can lead you in the right direction of understanding the links and structures between different businesses and “connect the dots” to verify who the owners are.

However, it can still be extremely difficult to bring criminals to justice, given the complexity of structures and cross-jurisdiction operations of many of the networks.

“If I’m dealing with an enterprise which is operating out of a former Soviet state that has created a UK company but it is controlled by two entities, in let’s say, the Marshall Islands and has an alleged owner who is themselves in the former Ukrainian territory of Donetsk, which is now annexed, even though I know all of these things I’m not sure I can do too much about it because there are now five jurisdictions involved and five lots of law enforcement and they are not going to work together.”

Nevertheless, says Barrow, transparency is still a key tool which can also help the banking community do something positive about the flow of funds.

“The weakest point is always the point of entry of money into the system and sadly there are still places in the world which are not robust about how they deal with the source of their client’s funds, but if our correspondent banks had access to really high-quality information it would make screening payments a lot more straightforward.”

The openness of the UK’s beneficial ownership registry is already allowing people like Barrow to investigate links between companies.

At the FinCrime World Forum later this month, Barrow will reveal how he used freely accessible beneficial ownership information to reveal that the material that exploded in Beirut last August was actually owned by a UK shell company.

Without giving too much away, the story is mind-blowing and will be used by Barrow to illustrate the interplay between different actors in different jurisdictions and the light that can be shone on different activity through transparency.

Before we go, Barrow is keen to stress the moral imperative of tackling financial crime and his frustration at any idea that money laundering is “victimless”. He tells a story, documented in the Guardian, about a woman in the Ukraine whose daughter had haemophilia but couldn’t be treated properly because corruption had “bled the health service dry”. “The thing that sticks with me is that the mother had learned to recognise the smell of her daughter’s blood, because that would save her life”, says Barrow.

“That’s all because some bloke wanted to buy a high-end property in Park Lane, in London, that he lives in for two weeks a year, why do we put up with that?” says Barrow.

His anger is all too apparent and it is difficult to see how anybody could think it unjustified.

Graham Barrow will be delivering a keynote speech titled ’The Transparency Illusion: UK Companies and the Beirut Explosion’ at 11.15am on 24th March at FinCrime World Forum. He is also moderating a session called ’The Drive for Corporate Transparency’ at 4.30pm on 23rd March