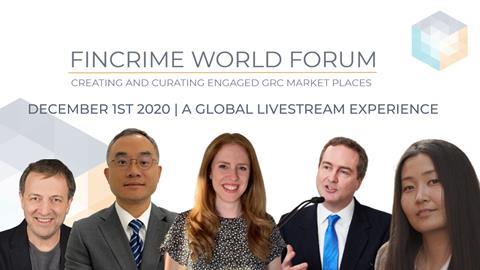 Seven things we learnt from the FinCrime World Forum

A round-up of the key talking points and takeaways from the global live stream experience.

Financial crime professionals from across the globe converged virtually on this week’s FinCrime World Forum.

Here, we round up the key themes from an exhilarating day of debate and insight.

1. COVID has posed huge challenges as fraudsters have sought to exploit the crisis

Inevitably Covid-19 was the topic, much like the virus itself, that refused to go away throughout the day. Whether it be the targeting of key public service infrastructure by cyber criminals, issues around the acceleration of technological implementation or the ways in which the pandemic is affecting the cross-border flows of illicit money, speakers and attendants made it clear that Covid-19 has been a shock to the sector.

The day began with a couple of sessions looking at the challenges for financial crime professionals operating in this new world.

Chris Felton, Director of the Economic Crime Academy at City of London police, cited the ways in which Covid has changed behaviour, from remote working, to more online shopping, more job searching online and demand for PPE equipment, all of which fraudsters have looked to exploit.

He said: “Since the initial shock, the fraudsters have adjusted. They’ve seen Covid as an opportunity, a different environment that means people’s assessment of the risk is perhaps not as good as it should be.”

Benjamin Quinlan, chairman of the Hong Kong Fintech association also said in a later session said that the amount of suspicious or fraudulent emails have been visibly increasing.

“I even got sent an email from myself, it was hilarious”, Quinlan said.

Felton pointed out that there are a number of businesses out there now in financial difficulty due to pandemic restrictions and “the temptation is going to be for them to commit fraud.”

The increase in fraudulent activity has also led to a busy time for Mark Cheeseman, Deputy Director in Public Sector Fraud at the Cabinet Office. Cheeseman used his address in the opening keynote session to emphasise the fast-paced activity of the cabinet office to respond to the current fraud pandemic.

“We set up new intelligence teams, we shifted resources between departments, we set up new data analytic structures, we launched a new Crime Stoppers hotline for the public to report fraud events,” said Cheeseman.

Pranav Naik of Revolut talked about fraudsters’ targeting of Covid government support schemes, some of which had looser controls due to a desire from governments to help vulnerable people quickly.

Naik said: “Germany, US and the UK faced a similar situation of money flowing in from the government support programmes. There was a lack of control from the government side – they wanted to make sure the vulnerable customers were not impacted – that allowed the fraudster to [access] the additional products and the signals to be different from what we had beee experiencing.”

Mike Haley, Chief Executive Officer of Cifas, a non-profit membership organisation aimed at fraud prevention, said he has seen a “greater sharing of intelligence” among members in Cifas forums during the crisis than previously.

But what about Covid challenges to more routine AML activity? Paul Simmons, Global Head of Financial Crime Prevention at GAM Investments, told the forum that there have been difficulties with not being able to see clients face to face. He said: “Day-to-day work in terms of client monitoring and transaction monitoring has been fine, but one of the issues we’ve had is around certifying documents.

2. Concerns about cryptocurrency’s compatibility with AML/CTF are at the forefront

They would not have been reassured by a keynote speech given by Doctor Nicholas Ryder, Professor in Financial Crime at the University of West of England.

“Cryptoassets, in association with the dark web, do provide terrorism financiers, money launderers, criminal gangs and human trafficking rings, an element of added security and anonymity which, on some occasions, can make it very difficult for law enforcement agencies, “ said Ryder, pointing to evidence that cryptoasset use has led to increases in terrorism.

Jonelle Still, of Ciphertrace, left a message in the discussion boards warning that “people are being scammed in the cryptosphere and currently there is no clear path to the restitution of funds.”

However, few would deny that cryptocurrencies are here to stay, and that there are also potential benefits from the use of blockchain technology if regulated and used in the right way.

“You’ve got crypto industries who are quite good at transaction monitoring  and then you’ve got the financial industries with the Know Your Customer side. Marrying up the two is going to be a big thing over the next 12 to 24 months” said Teggy Altankhuyag of Coinfloor.

3. SARs are not popular. But better information-sharing, rather than abolition, is the answer.

The FinCEN Files in September shed a light on issues with Suspicious Activity Reports, raising questions about their effectiveness in allowing banks and regulators to detect illicit activity.

Professor Ryder summed up some of the concerns, saying they are retrospective, encourage defensive reporting and there are issues with the definition of “suspicion”.

However, none of the FinCrime World Forum speakers or posters in the discussion boards were calling for a complete abolition of the SAR system, instead preferring to look at ways to make SARs work better.

Simeon Petkov, compliance lead at Bunq, posted in the discussion boards that there is no “sufficiently good alternative” to SARs currently and that “what needs to be improved is the capacity of Financial Intelligence Units”.

Sara Hjalmarsson, a consultant, was one of several to call for a focus on boosting the system with better sharing of information.

She said: “Address approachability and information-sharing between the private and public sector. The private sector actors should not have to feel afraid to discuss issues with regulators. Neither should they be left guessing due to poor quality/inaccessible guidelines.”

Denisse Rudich, co-founder of ELEMENTARYb, agreed and called for modernisation of the system.

“There still needs to be more training and awareness about what a good investigation looks like and what a good SAR looks like,” said Rudich, adding that “Information-sharing should also allow you to see the end-to-end chain.”

4. Data protection requirements may be becoming a signficant barrier to tackling financial crime

The inherent tension between data protection regulation, which seeks to protect details being transferred between businesses and jurisdictions, and financial crime intelligence, which thrives on information-sharing, has been a running theme recently.

In a forum session on the FinCrime Team of the Future, Dev Odedra, AML expert at Minerva Strategem Consulting, said that it is “imperative” banks can work together much more collaboratively when it comes to information-sharing.

He said: “Different organisations might have the same client, so if they could all see, within regulation, the full picture, it might help stop some of this financial crime. That’s the advantage the criminals have, everybody is blind in their own section.”

James Nurse, managing director of Fintrail, said: “Until obviously we’ve made some movement in terms of the regulatory side of things, and I guess permission to use data in a certain way, we are always going to come a little bit unstuck.”

5. There is caution around the adoption of artificial intelligence and machine learning

The potential for the use of technological solutions to boost AML/CFT and other financial crime detecting activities provided some interesting debate at the forum.

Simmons, of GAM Investments, said that automation of transaction screening, if not done properly, could carry a regulatory risk. He said: “I can see where the idea comes from because it potentially reduces resource costs and increases efficiency but in the due diligence space I don’t see that ever changing the way we operate, because I think you need that human interaction, you need a person looking at the documents.”

Nanak Mante, an audience member, agreed saying:  “We cannot rely on automated CDD process. It is important to recognise that the best, cleverest compliance technology can help detect unusual activity and not suspicion.” The human element is critical as we are dealing with human behaviour.”

Michelle Crotty, however, revealed that the Serious Fraud Office is exploring the wider use of AI, but there are issues with legacy IT systems to overcome.

“We see huge huge gains to be made through the use of automation and particularly for document searches, and where we currently use very junior lawyers to check things we can make significant improvements off the back of that with automation”, she said.

Becky Marriott, Vice President, Financial Crime at Tide, also sees positives in the use of tech. In a session called the FinCrime Team of the Future, she said “Automating a lot of the data entry and also reducing false positives means the financial crime team can really focus on the important stuff.”

6. Corporate transparency heads up our speakers’ US fincrime policy wishlists

In a session titled ‘After the US election’, panellists looked at the likely direction of US policy affecting financial crime following Joe Biden’s presidential election victory. 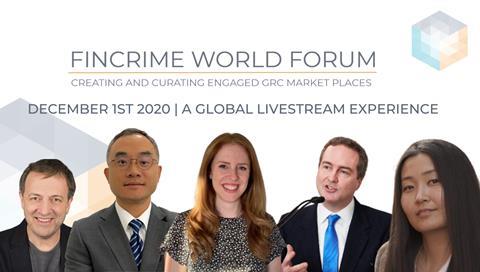 They also outlined their “wish lists”, with the need for a beneficial ownership registry seemingly at the forefront of people’s asks.

The fact that the US, unlike the EU and the UK, does not have a beneficial ownership registry has been raised several times by FATF, as FinCrime Report has previously reported. Although there is a bill in Congress, it is still unclear as to whether it will ever see the light of day.

Lakshmi Kumar, policy director at Global Financial Integrity (GFI), pointed to her organisation’s own research last year illustrating the lack of corporate transparency in the US.

“In every state you needed to give so much more information to get a library card from the public library then you did to set up a company”, she said.

Thomas Iverson, Vice-President of the Financial Integrity Network, also cited beneficial ownership transparency as something he wishes to see, along with modernisation of the AML/CFT framework and a stronger focus on enforcement.

Rudich called for more guidance on reg tech adoption and for a more measured approach to US sanctions in terms of linking sanctions to foreign policy. “I do hope that sanctions are used with impact and thinking about the outcome and also that there is a lot more communication on the ground,” she said.

7. The scale of the cyber threat was laid bare

“The tactical use of offensive cyber weapons by nation states is going to grow and more and more smaller states are getting these capabilities developing them,” Robert Hannigan, former director of GCHQ, outlined in his keynote speech.

He also warned that sophisticated attacks are increasingly using simple methods, pointing to a recent case where an attack was delivered via a Ukranian firm’s accountancy software package update. And because the firm’s server hadn’t been patched, they were hit.

“It was a wake-up call to everybody that they had to worry not only about their own defences but their supply chain and eco system,” he said.

Journalist and McMafia author Misha Glenny, meanwhile gave a video address running through a recent history of financial crime and geo-politics, taking in the end of the Cold War, dark web site Carder Planet, the pace of digital transformation, the new cold war between US and China and the significance of recent cyber attacks