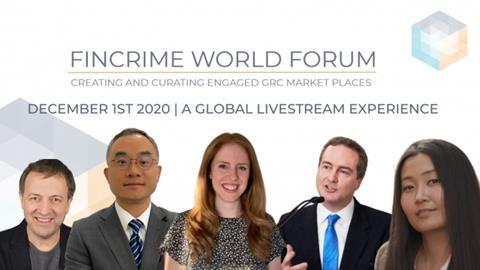 The event on December 1, features a whole day of keynote speeches and panel debates. Topics will range from fighting financial crime in a changed world due to Covid-19, cyber security, how to develop resilient risk management, regulatory updates, crypto assets and sharing information across industries.

Panelists will also discuss how to build the fincrime team of the future and debate the potential impact of the US election and Brexit.

It will offer a select group of vendors the opportunity to present and sponsor conference streams alongside keynote speakers and subject matter experts.

Who are the speakers?

Robert Hannigan is an experienced cybersecurity specialist who in 2007 was appointed as the Prime Minister’s security adviser. He led the creation of the UK’s National Cybersecurity Centre, oversaw the well-regarded Active Cyber Defence Programme and created the country’s first cyber-security strategy. He went on to serve as director of GCHQ.

Mark Cheeseman is the Director of the Government Counter Fraud Function, working across the UK government to work with departments and Ministers to find and fight fraud against the public sector. He also works part time as a special advisor to the Attorney General’s Department in the Australian government, helping to build the Commonwealth wide approach to countering fraud.

Since being appointed chief executive at fraud prevention body Cifas in May 2018, Mike Haley has actively worked to grow the community of stakeholders sharing data, intelligence and insight in the pursuit of preventing fraud and financial crime.  Mike is the chair of the Home Office Joint Fraud Taskforce (JFT) whose main purpose is to reduce the level of fraud and harm it causes to individual victims and organisations by making it significantly more difficult for fraudsters to operate within the UK.  Mike has led investigative teams in the National Health Service, Ministry of Defence, Office of Fair Trading, HM Revenue and Customs and Solicitors Regulation Authority.

DCI Chris Felton is a career detective with 28 years’ service with the City of London Police (CoLP) and Metropolitan police. Most of his career has been spent in the area of economic crime including postings to fraud investigation teams, the London Regional Asset Recovery Team, with major corruption enquiries, crime manager within the National Fraud Intelligence Bureau (NFIB) and secondment to the Cabinet Office Fraud and Error Team working on the Government Counter Fraud Profession and Fraud Risk Assessment standards. His current role is as director of the CoLP Economic Crime Academy.

He is regularly consulted by governments and law enforcement agencies in Europe and the Americas on the Balkans and Eastern Europe; on trans-national organised crime and on cyber security. He is also a regular contributor to major publications in Europe, North America and Japan.

Pranav Naik has led definition, design and implementation with a very capable team to deliver AML, sanctions and screening, and operational risk management.

He understands true risk and compliance management and how to focus resources.

Clive recently left his role at Bank of America to spend more time with his family. He remains acutely interested in all areas of financial crime, risk and fraud investigation.

Guy currently leads the Asia Pacific Financial Crime Compliance, Intelligence and Cyber teams having joined SWIFT in 2014. He has 16 years’ experience in financial crime compliance predominantly in utilities, entity resolution and correspondent banking KYC. He is responsible for driving take up of the Financial Crime, Intelligence and cyber portfolio across the region as well as engaging key stakeholders in the regulatory, advisory and banking communities.

establishing and improving the company’s Anti Financial Crime Efforts. In this role he has been involved in the scale up of the entire AFC Department with a clear focus on efficiency and effectiveness.

From a strategic perspective this has been led by the basic premise of doing things better than traditional banks and using the endless possibilities of combating money laundering and fraud, by continuously using advanced data points and finding innovative new measures and approaches to tackle the threat of Financial Crime.

Teggy Altankhuyag is the Co-Director and COO of Coinfloor, the UKs longest-running Bitcoin exchange. She has an extensive background in BI and strategic planning and her mission is to make the Bitcoin and crypto industry a safe, trustworthy and inclusive place for everyone to participate in. As the director responsible for compliance with the UK Money Laundering Regulations, she actively works with other industry leaders and professionals to share best practises and achieve this mission.

Benjamin Quinlan is the CEO and Managing Partner of Quinlan &amp; Associates. He is also the chairman of the FinTech Association of Hong Kong, an Adjunct Professor at the AIT School of Management, a Managing Director for EFADRIN, a Senior Advisor for Picowork and Emotics, a Mentor for PingAn’s Cloud Accelerator, and a Guest Contributor for eFinancialCareers andRegulation Asia. He was named as one of Lattice 80’s top 50 FinTech influencers in Hong Kong in 2018.

Paul Simmons is the Global Head of Financial Crime Prevention and Money Laundering Reporting Officer (MLRO) for GAM Investments, where he is responsible for designing,embedding and implementing global financial crime prevention and anti-bribery and corruption policies. Prior to his current position, Paul held MLRO roles at ADM Investor Services and Santander Asset Management.

Michelle Crotty joined the SFO on 10 August 2020. After training as a criminal solicitor in London, Michelle became a partner in Bullivant & Partners, undertaking criminal defence work ranging from murders to white collar fraud.

Following this, she joined the Revenue and Customs Prosecutions Officer, specialising in asset freezing, forfeiture and confiscation work, before joining the Sentencing Council for England and Wales in 2009, taking leadership of the team in 2010. Here, she delivered a range of guidelines including fraud, bribery and moneylaundering. Michelle moved to the Attorney General’s Office in 2014 to lead its criminal team and was promoted to director in 2015.

Dr. Nicholas Ryder has been a Professor of Financial Crime at the University of the West of England, Bristol since 2013.

His main research interests are in financial crime, especially money laundering, market manipulation and terrorism financing and he has published widely in these areas. Dr Nicholas has been asked to consult on numerous matters related to financial crime for Bloomberg News, the BBC, CNBC, the Sunday Times, the Independent and the Wall Street Journal.

Andrei studied and practised law in Romania. He worked as a prosecutor, a diplomat and then in retail banking. He spent four years working at the European Union Court of Justice. He then joined the European Commission, first as a member of its legal service. He is currently a team leader for anti-money laundering in the Financial Crime Unit of Directorate General Justice.

Alun is a partner in the Criminal Litigation team and specialises in serious or complex financial crime, proceeds of crime litigation and corporate investigations. He has particular knowledge of issues surrounding corporate crime and deferred prosecution agreements.

He has extensive experience of investigations across borders and mutual legal assistance matters and is regularly invited to comment on police and judicial co-operation post-Brexit. Alun is a highly experienced criminal lawyer.

James Nurse is the Managing Director of FINTRAIL, a consultancy company who specialise in anti-financial crime compliance. James has worked with various FinTech organisations and more established businesses in the regulated sector supporting them with their anti-financial crime needs. Prior to joining FINTRAIL, James has held 1st and 2nd line roles within challenger banks, money transfer and online gambling companies.

Dev Odedra is an independent anti-money laundering and financial crime expert. He has significant experience in managing financial crime risk in the retail, corporate and investment banking sectors, having worked at a number of global banks. His expertise covers investigations, advisory and controls implementation and improvement.

Gayatri Viswanath is a strategic, analytically minded and results oriented Financial Crime Compliance professional with a financial services background. She is experienced in handling large budgets, global mandates, and designing and executing initiatives for a diversified group of global stakeholders, in multi-cultural environments and in particular, with organisations that are changing and evolving.

Gayatri leads and collaborates with allied parties and stakeholders to provide strategic people insight and recommendations to the leadership team.

Rebecca (Becky) Marriott heads up the Financial Crime department at Tide – protecting Tide’s members from criminals. Before joining Tide, Becky most recently worked for FINTRAIL, where she got to work with many different FinTech companies, helping to build out their anti-financial crime controls, processes and teams. Becky also previously worked at HSBC in their Financial Intelligence Unit, where she investigated customers that were involved in huge money laundering networks, breaching sanctions, tax evasion, and terrorist financing

As Chief Auditor at Citi, Thomas Nadratowski (Jnr) is responsible for running the Internal Audit & Anti-Money Laundering (AML) and Sanctions third line of defence assurance programme. He has 21 years’s experience working at major US financial institutions and a successful track record of providing executive leadership within all three lines of defence (compliance, internal sudit and client wealth Management).