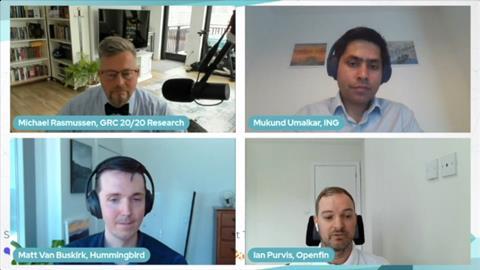 The first episode of the GRC Red Flag Series discusses the GRC Orchestrate project and calls for firms to work collaboratively on standardising industry-led solutions to RegTech.

In episode one of the GRC Red Flag series with Michael Rasmussen, Mukund Umalkar, Head of RegTech Partnerships of ING was joined by Ian Purvis, VP of EMEA at Openfin, and Matt van Buskirk, Co-founder and Co-CEO of Hummingbird to discuss the RegTech platform, Orchestrate.

ING’s GRC Orchestrate is intended to operate as a new entity, offering the market a RegTech platform similar to an App Store to both find and consume pre-validated RegTech solutions. In addition, providing a technology framework for these solutions to connect seamlessly across each other and alongside existing legacy architecture.

ING’s Mukund Umalkar says that Regtech can help banks navigate the complexity of the financial industry following the 2008 crash and the hit of COVID-19, but the RegTech industry is lacking comprehensive standardisation.

Umalkar says, “It’s a bold and ambitious vision but directionally, this is the right way to go […] it provides an opportunity to standardise the space a bit more.”

Using a RegTech map to illustrate the complexity of the RegTech space, he says, “Think of regulation as a value chain. What we have seen is that it is very helpful to break it down because its a very broad space. […] A lot of new players are emerging and using very advanced technology to navigate,” he says.

With a lot of activity emerging in this space, there are observable challenges engaging in this ecosystem, particularity in regard to deciding on whether to build vs buy; which companies in the space to work with; how to engage in the growing network; how to scale up, and depth vs breadth in technology.

Umalkar says, “A single-solution cannot solve this, we really see this as an intuitive that is built together with the industry.” Therefore, he calls for firms to collaboratively work on the GRC Orchestrate project together to “start to bring the best in class solutions together under this one platform.”

“If we can all build to an interoperable standard, financial providers can pick which best fits their regulatory standard.”
Matt van Buskirk, Hummingbird.

Additionally, “Disrupters find their niche in the market,” said Ian Purvis, “but bringing in all these different silo technologies will create more headache […] We can allow users to have little bit of flexibility in how they go approach things.”

Looking at recent research on employee productivity, Ian Purvis added, “users have sometimes up to 36 applications on their desktop” and estimated that applications eat away at around 80% of our productivity time. But in the near future, Orchestrate aims to “put all notifications into a central notification centre that can be prioritised by the user,” Purvis said.

In a weekly news segment, Rasmussen discussed GRC’s current buzzwords and areas of growing interest, with this weeks’ spot taken by Environmental Social Governance (ESG), which Rasmussen predicts will continue to become an important role for Chief Compliance Officers.

He said on the topic, “Compliance officers are chief integrity officers in an organisation,” but companies “should not be put off by the E in ESG, as the S, the social, is just as important. It’s a very broad stroke and organisations need to be paying attention to this.”

In the next episode of GRC’s Red Flag Series: Putting the G in GRC, Michael Rasmussen will be joined by new panellists on the 17th June at 4:30pm BST to discuss the role of the board in the GRC space.

To register to attend the next GRC Red Flag Series event on Putting the G in GRC, click here.