Illicit trade is a popular vector for sophisticated transnational organised crime groups (OCGs) due to its relatively low risk and high reward nature. By leveraging modern technologies and exploiting the increasingly frictionless structures of globalised trade OCGs are profiting handsomely. 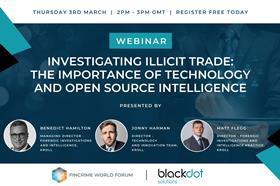 But there are real costs: as well as harming the health and wellbeing of individuals that consume counterfeit medicines and other products, illicit trade is harming society more broadly as the same routes and networks are used to traffic drugs, people and weapons. The integrity of the financial system is also affected through the laundering of the funds that are generated.

Despite the fact that illicit trade crosses a number of “predicate offenses”, discussions around financial crime often neglect to focus on illicit trade.

In this webinar we hope to remind audiences of the importance of developing greater awareness of illicit trade, provide an overview of common typologies and methodologies, and offer tips on how to detect and investigate the people, organisations and networks involved.