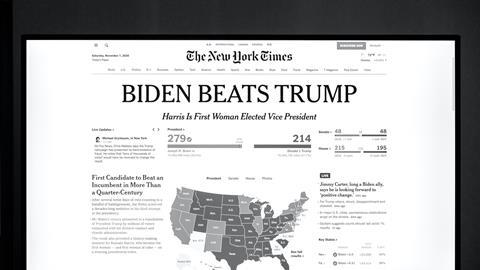 The newly elected President Biden faces a host of issues to grapple with, not least of them the global pandemic, which has become heavily politicised, as well as preoccupying US media and citizenry throughout much of the election period.

But on top of the messages that absorbed the most oxygen during the often-heated election campaigns, other issues are also waiting for political headwinds to propel them into 2021.

Not least of these is the issue of privacy. It’s a relatively uncontroversial topic – Americans want to protect their privacy and have repeatedly signalled this in research. A McKinsey Survey of 1000 North American consumers, for example, reported that 87% of respondents said that security concerns would prevent them doing business with a company, and that 71% would cease a business relationship with a company that gave away sensitive data without permission.

Translating the growing importance of privacy among businesses and consumers into a coherent government response that builds on existing US legislation is something that the incoming President will have to tackle.

We’ve boiled down some of the major issues that President Biden will likely find on his plate over the course of the next four years.

1.Calling in the feds: a national privacy law at last?

There is agreement among both Democrats and Republicans over the need for a federal privacy law, but a bill has been slow to meet with success, due to largely partisan disagreement over federal pre-emption – displacement of the current patchwork of state privacy laws, which is generally opposed by Democrats – and private right of action – the ability for individuals to sue over alleged violations, which is generally favoured by Democrats. In a fraught election year, that elusive bipartisan compromise has not yet materialised.

With a win that was less decisive than the Democrats might have hoped, and a question mark remaining into next year over who will control the Senate, slow negotiations on privacy legislation may continue.

With cross-border data transfers being big business, the decision by the Court of Justice of the European Union (CJEU) to strike down the Privacy Shield allowing data transfers between the EU and the US is something that the new administration will need to tackle. The willingness (or otherwise) of the new administration to align more closely with the EU concerns over the reach of US national security laws into data will be critical. A Biden administration could bring more allies to the table in any push back, strengthening the US negotiating position.

Debates over Trump’s executive orders banning US transactions with Chinese-owned platforms WeChat and TikTok over data collection and national security concerns have rumbled on in the courts, with the Trump administration not yet managing victory over either platform in the US. But no President will want to appear weak over China. Will Biden fight to uphold the bans?

4.Breaking up is hard to do – big tech regulation

The potential regulation of big tech companies has garnered many headlines of late, and Democrat-sponsored antitrust action against perceived tech monopolies could be on the cards.

At the same time, social media companies, threatened by Trump and his calls to “Repeal Section 230” (which removes liability for third-party content from the shoulders of social media platforms like Facebook) aren’t out of the woods yet.

In an interview with The New York Times in January, Biden made the following comments:

“And it should be revoked. It should be revoked because it is not merely an internet company. It is propagating falsehoods they know to be false, and we should be setting standards not unlike the Europeans are doing relative to privacy. You guys still have editors. I’m sitting with them. Not a joke. There is no editorial impact at all on Facebook. None. None whatsoever. It’s irresponsible. It’s totally irresponsible.”

The stakes are high for tech companies heading into 2021, and with increased focus likely to be on social media platforms in particular, could this be a win for privacy campaigners, long concerned about the data they hold?

Only joking. Biden has been clear that his Covid-19 response will differ significantly from Trump’s. While there has not been a consistent application of traditional or digital contact tracing in the US, Biden may choose to ramp up efforts, taking on the privacy concerns expressed by many US citizens. His campaign pledged to:

“Establish a U.S. Public Health Jobs Corps to mobilize at least 100,000 Americans across the country with support from trusted local organizations in communities most at risk to perform culturally competent approaches to contact tracing and protecting at-risk populations.”

Perhaps transparency in government data tracking both the disease and efficacy of therapies and vaccines will be high on Biden’s pandemic priority list?