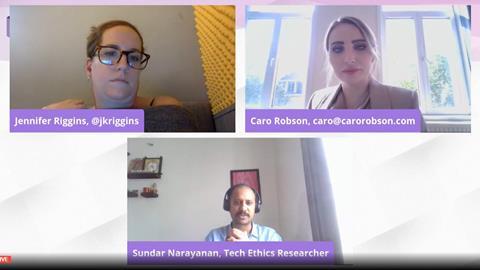 How can ethical AI change the world? Experts at PrivSec Global discuss

Ethical use of AI was one of the focus debates on day two of PrivSec Global.

In front of the livestreaming experience’s international audience, experts deep-dived into ethics have simply not kept up with technology, and discussed how we can build towards a more principled future as we move through digital transformation.

Laying out the foundations of the talk, Jennifer Riggins, Tech Marketing Consultant, Tech Storyteller, SEO Copywriter, described the idea of ethics in AI as “an overwhelming topic.”

Pointing out the reality that not everyone owns a smartphone, Jennifer cited Invisible Women (Penguin 2019) as an illustration of how the GDPR has fallen short when it comes to dealing with data bias in a world that favours men over women.

“The GDPR is a step forward, but a lot of the intent behind the framework has been lost,” Jennifer said.

“It’s true, AI can be used to spread misinformation. When I started in this area, it was given that platform operators had immunity; had to move away from that because platforms have been so influential. The platforms are now being governed by private companies in regards to content.

“There’s been a cultural shift in organisations and change, the public want better tech, better privacy etc. In the EU we’re very lucky, very resourced and educated regulators in this field, but the same cannot be said for other countries,” Caro continued.

“The UK Alan Turing institute, I also recommend Cathy O’Neil’s Weapons of Mass Destruction (Penguin 2016), and look at the Institute of Electrical and Electronics Engineers (IEEE) which has work called ethically aligned design.”

“We traditionally get scared and then fascinated by something. When everyone gets excited, we start trusting that. If a lot of people like it, it is good and that’s where we are.

“Convenience can be confusing. One needs to demand specific answers, seeking an audit of those systems. When those systems are audited and represented publicly you can get answers.

“The opportunity for you to get hold of alternatives is not made easy. We, as humans, are very biased, and when we build systems these will also be biased. Look at digital technology, we build it for X region and then expand to Y region where it may not work in the same way,” Sundaraparipurnan concluded.