Joe Tidy and this week’s guests discuss recent wins for cyber, Kleptocracy in London and Russia, and what needs to be implemented to reduce the risk of virtual assets to AML. 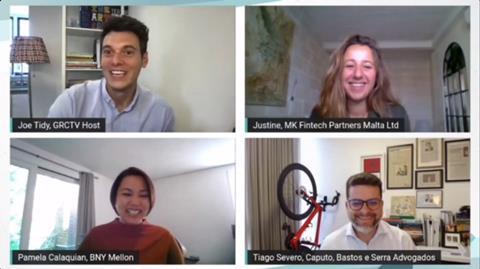 Most notable was the massive global crime sting conducted through ANoM encrypted messaging app by the FBI and Australia’s Federal Police, which resulted in the arrest of 224 suspects on over 500 charges.

Similarly, just as it had set up its taskforce, the Department of Justice successfully seized millions paid in ransom through the colonial pipeline attack by Russian hackers. Dallaway said Deputy Attorney General, Lisa Monaco thanked Colonial Pipeline for quickly notifying the FBI. It was the “timely disclosure to the FBI” that managed to secure some of the ransom, said Dallaway.

For this week’s In Conversation, author of bestseller, Moneyland and freelance journalist, Oliver Bullough is joined by Roman Borisovich, a former investment banker, anti-corruption activist, and undercover investigator. Together they discuss the “colonisation by oligarchs,” and the escalation into global Kleptocracy.

With an ever-greater share of the world’s countries sliding into kleptocracy, Roman Borisovich and Oliver Bullough explain what this means by homing in on the activities in London and Russia and why people should care.

“London is undoubtably the world’s biggest centre of money laundering,” as it provides the perfect environment, says Bullough. “It’s a country that combines strong property rights, an open economy and weak rules around financial crime.”

“Whole districts of London have been colonised by oligarchs,” but Bullough says compared to just six years ago, there is a lot more recognition around the issue.

According to Borisovich, over 40,00 anonymous companies own properties in London. The issue, he said, “is that it is currently a very complicated process to establish ownership of these companies.”

In Russia, Borisovich’s place of birth, he says financial corruption is part of the “mechanics of the machine,” in which the government allow you to be financially corrupt, “so long as you support the ruling regime.”

Borisovich said he would like to see more improvements like the UK’s sanctions for serious corruption, “and see it reaching the culprit.”

“I would throw away with offshore secrecy, that is absolutely redundant,” he added.

Speaking on this week’s panel about the financial risk of virtual assets were, Dr Justine Scerri Herrera, researcher at the Ministry of Finance Think Tank, and Partner at MK FinTech; Tiago Severo Gomes, Partner at Brazilian law firm, Caputo Bastos e Serrs Advogados, and member of the banking committee in Brazil, and Pamela Calaquian, Director of Compliance and Controls, Asset Servicing and Digital at BNY Mellon.

Focusing on what can be done to minimise the risk surrounding virtual assets such as Bitcoin, the panellists were in agreeance on licensing institutions and chains, tracking the exit points of where virtual assets land, and awareness around custodian activities.

Dr Scerri Herrera said, “These service providers have to be regulated and monitor transactions. […] People do not check if the institution or chain is actually licensed, and that’s when the problem starts.”

“It’s all about movement of funds,” said Calaquian, “it’s global.” She added, “The province of where the assets started and where it’s going can be easily tracked.

In agreeance, Severo Gomes said “if we have the exit points with the huge and strong KYC (Know Your Customer) we can deal with the problem and then make the cryptocurrency environment a safer place.”

Additionally, defining the usability of crypto will be essential moving forward, as Calaquian suggests, the aspect of tokenisation in the future can answer how we make use of this technology and how it will scale.

“It’s in everybody’s interest to define and then educate,” said Dr Scerri Herrera. “It will be opportune to first define what we are dealing with especially in regard to your jurisdiction.” Adding, “be aggressive in marketing to get the point across and why you should be regulated to protect these services.”