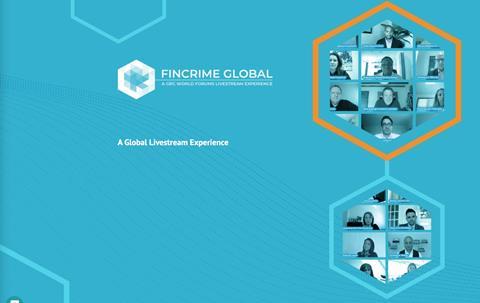 The morning sessions began with a deep dive into anti-money laundering (AML) compliance programmes and systems needed to support them, such as built-in internal operations, user-processing policies, accounts monitoring and detection, and reporting of money laundering incidents.

“Fincrime and criminal behaviour is a societal problem, so we have to collaborate as banks to have an impact on these things. In the Netherlands, we are working together far more than we used to even ten years ago.

“We have five banks working together to be on top of monitoring, bringing extra insight, which helps the police in their investigations.

“In intelligence-led financial crime fighting, we need a global set of standards and processes, and systems rolled out over the whole bank. Then these behaviours become a profession – something that’s been there for a long time. We need to build up to these high standards of expertise and professionalism, and these factors attract the best people.”

“Many banks have the same challenges – huge transformation programmes, same pressures from the regulators – so attrition rates can be high. We need to work on retention therefore,” Robin de Jongh continued.

Fintech has produced a flurry of innovation in recent months, from new payment platforms to robo-advisers, coloured coins to smart contracts and more. While these applications have the potential to deliver financial services faster and more securely, they come with their own financial crime and compliance challenges.

“Traditionally, banks have been the most regulated, and there’s always a new regulation, and confusion usually comes with that.”

“All financial institutions have an operational line of defence, the compliance function – the group which transposes national law into the institution’s policies; and then there is the internal audit function, which has to see that everything that is recognised as a policy is implemented. That is how the three lines of defence traditionally work,” Sujata Dasgupta added.

“If you’re an established institution – you may be forgiven for going a bit slower. We’ve seen fines being levied against FinTech companies that banks might get away with.”

“It’s tough for FinTechs, as they don’t have much clarity over what is expected, but there’s a really high bar in terms of what they’re expected to get right. People need to start de-coupling – if you’re a FinTech company, you’re going to encounter digital assets, and the accompanying regulatory requirements.”

“I think that this brave new world – remember we’ve seen Rishi Sunak creating an NFT at the Royal Mint – I think we’re making a mistake by considering it a niche sector. If you’re in FinTech, there is an inevitability that you will deal with digital assets at some point,” Larkin continued.

In the afternoon at FinCrime Global, a panel of thought-leaders examined the geopolitical landscape of 2022 and considered how compliance programmes must adapt.

Sanctions have become a central tool of foreign policy in jurisdictions around the world, prompting compliance professionals to pay closer attention to the geopolitical alliances and divisions that could result in new, and even conflicting, regulatory obligations.

“Concerning countries refusing to comply with certain sanctions, I believe that’s probably true. Companies, however, don’t have the luxury of that option. Businesses don’t have a choice – I think regardless of where companies are based, if they have international commercial ties, sanctions are going to continue to be a very important thing to comply with.

“If the war on Ukraine establishes that sanctions are going to be used as an effective form of peaceful governance, it’s not only going to be NATO using sanctions going forward, it’s going to be any country that wants to damage adversaries without venturing into full-blown physical conflict,” Ray continued.

“We have to be concerned about the trading of networks developing among sanctioned countries. Russia could develop a network among other sanctioned countries, creating a parallel global network of trade – a system currently outside of the reach of the current global AML system. We have to pay attention to this development.”

The complexities of compliance were dealt with in the following session at FinCrime Global, with former FinCEN and US Department of Justice attorney, Amanda Wick talking through the impact of US president, Joe Biden’s recent executive order on Central Bank Digital Currencies (CBDC), as well as the challenges of regulation and enforcement.

“There have been a lot of security issues with some of the exchanges and projects. Sometimes people are surprised to learn that there are thousands of crypto currencies.

“One of the things people love about crypto currency is the idea that you control your own money. But with personal autonomy comes massive responsibility. Right now, in digital assets you don’t have the same regulations and the same clarity of regulations as you do in traditional finance. You don’t want investors losing hundreds of millions of dollars.”

“Outside of government agencies, I think it will have a huge impact. The fact that major companies, such as Binance, after over ten years of crypto being in existence, are finally acknowledging regulation, is huge.

“Enforcement simply isn’t big enough yet to patrol an entire industry, so you have to have some element of self-regulation.

Day one at FinCrime Global ended with an exploration of FinTech and AML regulations through the remainder of 2022.

Anti-Money Laundering compliance in FinTech is a regulatory requirement in the majority of the countries in order to prevent financial crime including money laundering and terror financing.

FCA, FINMA and AUSTRAC are some of the major regulatory bodies across the world and all FinTech companies have to abide by the laws.

“In financial institutions, sometimes you go through the motions of filing a suspicious activity report (SAR) because you just don’t want to take a chance.”

“The role of academia would be to prototype and showcase best practice, but this would then have to translate into policy.”

“The model will give you alternatives and then the expert would come in and suggest on places for focus. This is an integrated process where the subject-matter expert is involved at all levels.”

“Public and private sector collaboration is key. Also, we have all these years of watching the financial industries making mistakes and developing. So, we have all these opportunities to learn, individuals who are ready to use their knowledge, plus all the tools are out there to harvest this information. Robots aren’t going to take our jobs, they’ll be our best friends.”

“The key thing is that FinTechs are going to be impeded by the same controls, but we have opportunities to learn from what’s gone on, and not make the same mistakes again.

“We need a global approach to AML, and you’re only as strong as your weakest links. We’re impeded because of different interpretations of risk.

“Many of the major AML fines we’ve had over the last ten years was HSBC. It’s usually due to lapses in due diligence. You can shape KYC forms in real time with fintechs – they can start with a really strong data pool from the outset. We are trying very hard, and we’re constantly learning,” James Rickett continued.

Day two of FinCrime Global will once again bring insight, guidance and debate to help inform financial and banking professionals, and senior practitioners working in the financial crime sector.

Crypto regulation, protection against crypto-fraud, and the EU’s anti-money laundering and countering financing of terrorism (AML/CFT) proposals go under the microscope.