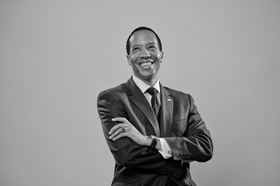 James Felton Keith, is an award-winning engineer and economist who was the first Black LGBTQ person to run for US Congress. He currently lectures on Inclusion at the University of Georgia’s Terry College of Business. As an activist, his Data Unions redefined the labor movement and personal-data as the natural resource driving all corporate productivity. As an entrepreneur, he established the first international diversity & inclusion certification and the first insurance policy for a lack-of-inclusion based on an “inclusion score”. As an author, his bio-political philosophy, Inclusionism, is at the forefront of International Relations and Human Rights diplomacy.

JFK has incubated the data industry via his founding of Data Unions and Personal Data Week conferences. He co-founded and edits the Ethics of Personal Data Collection series at Anthem Press. He and his institutions have either written or consulted on all of the seminal global cyber policy of the 2010s. He has founded multiple companies across the Non-Profit InsurTech FinTech and AdTech sectors. Most notably: Slay TV, LGBT Chambers, and Accrue.com. His expertise is in the ethnography of technology, or the study of the culture of tech. Over the past 20 years between 4 continents, he has been obsessing about economic inclusion, and how to get equity in the hands of the people who have increasingly less, while the world becomes more productive from their input.

Working between government and business he regularly says “it’s necessary to have the mind of a CEO and the heart of a Social Worker to solve real people’s problems”. His career transitioned after founding Detroit’s LGBT Chamber of Commerce and the “Pride Nights” at the four Big Box American sports franchises: NBA, NHL, MLB, & NFL. James has been appointed to the cabinet of Elected Officials, taken over for and advised CEOs, Academics, Governments, and Non-profiteers. James is an elected member of the New York Democratic Committee and is a frequent keynote at global venues like the United Nations, Future Tech Congress, Data Protection World Forum, and the World Pride Human Rights Forum to name a few.