Financial crime professionals from all over the world gathered virtually today for the FinCrime World Forum. Here are the talking points and takeaways from Day One. 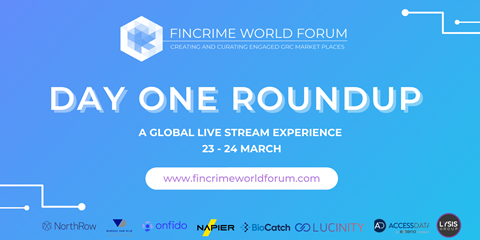 1. Time for a new approach?

A running theme through Day One of FinCrime World Forum was the need to move on from older Anti Money Laundering processes that are not working and to adopt fresh thinking and new technologies to deal with modern threats.

Sir Rob Wainwright, former director of Europol, kicked things off in this vein in his opening conversation this morning, warning that

“The problem of money laundering and financial crime and in a wider sense, economic crime, is growing in scale and levels of sophistication.”

For Wainwright, the growth of professional money laundering networks, has been noticeable. “These are specialists..they are very good at playing the system”.

In response to this and complex ever-evolving threats, a new approach is needed, said Wainwright. “We have a system that was designed many years ago” he said. Instead, he said, we need a more risk-based and outcomes-focused approach to tackling financial crime rather than a “blanket-approach to transaction monitoring”

Wainwright called for better collaboration between the public and private sector. “If you can leverage the technology and resource strength in the private sector and somehow combine it with the intelligence available in law enforcement then you have a magic formula” he said.

And he went on to downplay the privacy concerns that can sometimes hold information-sharing back. “If you stick to the golden principles of privacy, one of the most important of which is proportionality….then you can really work with privacy legislation, he said”

2. The need for better quality of data

While Wainright was questioning the usefulness of the current reporting systems, speaker after speaker raised the importance of better ways to improve the quality of data.

At a session about reshaping future compliance prioritie,s Rhodri James, Chief Revenue Officer at Northrow said we need the emergence of “perpetual” due diligence

“I think there’s a definite shift we see from a leadership perspective in people expecting financial crime to move away from transactional, and doing more of what they did before, to actually being more insight-orientated,” he said.

In a later session, David Balson, Director of Intelligence at Ripjar, said that good quality data is crucial, particularly if moves to increase transparency are to be effective.

“We may lip service to transparency but if it’s not in the right format it is as good as dumping box files of photocopied PDFs into someone’s lap, now that is not transparency” Balson said.

Part of the improvement speakers felt needed making to data is about ways of utilising existing data in different ways.

Helen Erftemeijer, Know Your Customer Lead at ING, speaking in a session looking at fincrime post Covid-19, said: “Can we bring data together in a secure way and combine it in a meaningful manner, and if we run analytics, can we find information that I would not have found on my own?”

Whereas Sarah Hargreaves, Director of Training, International at Exorro, saw an opportunity in storing data for financial crime purposes in the cloud. She said: “We are collecting much larger data sets, using AI is a proactive way to get through that quickly.”

However Sujata Dasgupta, Global Head, Financial Crime Advisory at Tata Consultancy Services, cautioned: “We are not completely confident that if you directly move to an AI-based system, that we would have all of the rules covered, it needs more maturity.”

3. Public-private information sharing and a more targeted approach to reporting

One of day one’s highlights was undoubtedly Nick Maxwell’s session on the benefits of public-private information-sharing.

Maxwell, who heads up the Future of Intelligence Sharing research programme, extolled the virtues of public-private information sharing as a model and gave examples of different ways these have been implemented across the globe.

He also talked about the potential of Privacy Enhancing Technologies (PET) to help ease data-sharing and allay privacy concerns. PETs are technologies, such as homomorphic encryption, that allow agencies to carry out computations on data without the raw, personally identifiable data being revealed.

“PET is being explored by some [public-private] partnerships with regard to how that can leverage greater results, at greater speed while still preserving privacy,” said Maxwell.

Putting all this together, Maxwell summed up where he thinks this trend is all going.

He said: “The megatrend is moving from a system where regulated entities are asked to identify crime in isolation in their individual silos of data - based on their own understanding of risk, without indications from others about what to look for - to a system where there’s an opportunity to track transactions across multiple institutions, to run typologies across multiple institutions, to understand behaviour.” He said this would allow a reduction in reporting, as the reports would be more focused on criminality.

4. Brexit – is your glass half full or half empty?

The Brexit trade agreement contains a pledge to maintain co-operation on financial crime matter,s but the United Kingdom’s access to various databases has been effected.

The Forum’s “Brexit means… Will the UK and EU keep aligned on financial crime?” session saw differing degrees of optimism among the panellists as to what Brexit will ultimately mean for the fight against financial crime.

However, Dr Anna Bradshaw was more pessimistic about the loss of access to the Second Generation Schengen Information System (SIS II), which allows states to share information for law enforcement and to the framework which allows sharing of information between Financial Intelligence Units.

“The reality is that the loss of direct, real-time access to these databases will be acutely felt, and there are not any equivalent comparable exchanges outside the EU,” said Bradshaw.

“There’s a real opportunity for the government now to include fraud and economic crime in the Online Harms Bill for example…that would be a step in the right direction,” he said.

The conversation later moved on to the European Union’s plans for a unified Anti Money Laundering rule book and single supervisor and what this would mean for the United Kingdom.

“Questions will be raised about what the UK does in response, the major turning point will be when the EU moves away from relying on directives to relying on regulations” Bradshaw said.

5.The challenges for achieving corporate transparency

The afternoon saw a session on corporate transparency, chaired by Graham Barrow, Director at Dark Money Files, who will be expanding on the theme in a keynote address at the Forum tomorrow,

In today’s session, the panel was in strong agreement about the moral case for more corporate transparency but realised the barriers of implementing it across the globe.

“We have significant pressure from a number of companies, to not just limit the data to a subset of what’s collected, and probably published publicly, but also to add to the terms and conditions to limit the reuse of an access to that data”

Author and Journalist Oliver Bullough was keen to stress that it is not just criminals who want to be non-transparent, there are also reasons why legitimate businesses might not want their affairs to be known, perhaps for competitive or market reasons.

“The challenge is to make it so embarrassing that legitimate companies won’t do it” Bullough said, referring to companies not being transparent. He says the argument that if we crack down in the UK the money will be moved elsewhere “is just an excuse not to do anything, it’s not an actual argument”.

6. Is it a mistake to set up cryptocurrency crime departments?

Nick Furneaux, a world-renowned cryptocurrency forensic expert and a crypto-investigation trainer, delivered an absorbing ‘training session’ to FinCrime World Forum on what cryptocurrency is and why “cryptocurrency crime” doesn’t exist.

He said: “Cryptocurrency is just a token with an accepted value by a community”, saying ultimately it is no different to other currencies, such as gold, metal, cash or even rings of coral used in Mesopotaemia thousands of years ago.

His ultimately argument is that there is crime involving cryptocurrencies but no such thing as “cryptocurrency” crime and if it seen as something investigated separately to other crime, key elements of investigations could be missed.

He said: “Around the world I’m seeing police forces and government agencies setting up cryptocurrency investigations…It’s really important we do not view cryptocurrencies as a new category of crime and roll it into a new department of cryptocurrency because there is always other evidence to consider”

Jim Richards, founder of RegTech Consulting and a major authority on all things connected with anti financial crime in the United States, took the audience through the various machinery of US government, outlining which positions are yet to be filled and how the picture might lie.

For Richards the biggest weaknesses in the current fincrime system in the US are the lack of regulation for Designated Non Financial Business Persons (DNFBPs) and the lack of corporate transparency, pointing out the proposed new beneficial ownership registry won’t be accessible by the public.

He also said that, while it is a good start, the register is unlikely to be implemented for a few years, because it will take time to be built, and for the necessary regulations proposed and published, and for businesses to have two years to register.

Clay Stevenson, a consultant specialising in sanctions, said: “On sanctions policy the direction will remain fairly constant, what will change how the administration goes about doing it.

“I think there’ll be more precise language, greater inter-agency co-ordination, more multilateral engagements, and a greater inclination to trust the professional judgement of the civil services.”

Richards said he too believes there will be more co-ordination with international partners. “I’m excited to have the United States re-engage with the global community on collaborative, less bombastic basis,” he said.