FinCrime World Forum’s second day has delivered another agenda packed with fascinating ideas and insight into the current and emerging landscape of global financial crime. 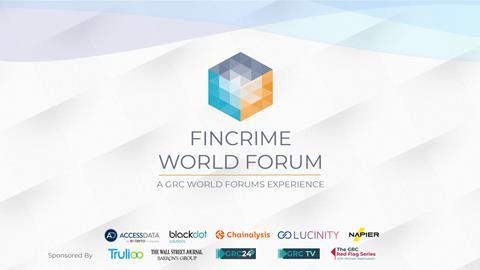 The morning sessions got underway with a study of the race to comply in the Middle East and North Africa (MENA) region, in a panel debate chaired by Maya Braine, Managing Director, Middle East and Africa, FINTRAIL.

“All Middle East countries need to fight corruption and promote transparency in order to establish investors’ confidence and to create the ground for stronger business moving forward. Corruption in Lebanon is systemic, and is a major impediment to businesses even thinking of investing in the country. In terms of sanctions, Lebanon now is on the front line of growing financial tension with the US.”

“As economies in this part of the world try to attract more foreign direct investments, tax nomads will become a greater problem for Financial Institutions. The risk profile emanating from crypto-assets will come to the fore.

“From an ESG (environmental, social, governance) point of view, there are associated FinCrime risks that we’ll all need to be on top of, such as illegal wildlife trafficking, social elements such as human rights abuses, and also from a governance perspective – green washing, and carbon credit fraud, as well as corporate fraud will increase in my opinion, too.

“Through our recent operational activities, we have much better intel and insight into the mechanics of organised crime operating in Europe. Little has changed in what drives criminals to join organised ventures, the profit motive shapes crime schemes and dictates risk/benefit considerations.

Touching upon the impact of Brexit on the EU’s progress against the mechanics of organised crime, Mühl said:

The impact of COVID-19 on criminal activities was also a focus issue. Mühl said:

“We see an increase in fraud cases, counterfeiting of medical equipment and other signs that the criminal element is taking advantage of COVID-19. We have seen a rise in online fraud as people stay at home more. Criminals were quick in using this and exploiting this, pushing up cyber-criminality and online fraud generally. Today there is hardly any crime that doesn’t involve an online element.

Following this, Tom Burgis’ keynote, “Fighting Kleptopia” took viewers on a compelling journey into corruption, dirty money and the fight against global kleptocracies.

“A responsive government is one where those who have power do so with the consent of a majority of the people most of the time, broadly speaking; the people have a hold over those who rule in their name. Sadly, a large majority of countries in the world are run under a kleptocracy whereby the purpose of political power is to loot – buy loyalty and purchase legitimacy abroad.

“Someone such as Putin is a direct product of the kleptocratic bacchanal left over from Soviet Russia. Enormous quantities of state assets then passed over to those that could grab them – a perfect recipe to create a kleptocracy, where economic benefits are fused with political control.

“The revelation of the Trump era is how suddenly, politically, a kleptocrat can take over the US, that’s exactly who Trump was. For decades before he became President, he was sustained by vast sums of money pouring through his many shell companies that came from kleptocracies.

“There is a fundamental flaw in the global economic system, which is the ability to use and move money anonymously. We have to fundamentally address whether economic activity should permit anonymous activity at all. The currency of kleptocracy is anonymous money,”

In the afternoon, cryptocurrencies fell under the FinCrime World Forum spotlight, with industry experts asking how “safe” digital currencies are.

It’s an evolution of the way we think about payments and money. The world is going digital, and the pandemic has made the need to interact digitally acute. Our reliance on digital is greater, and it’s true for money too.

“There’s a lot of illicit money moving through crypto, but then a lot of criminals are using cash and the financial sector. A lot of the risk comes from the regulatory approach.

“It’s more difficult now to launder money through a bank that has had years and years of bespoke regulation and compliance imposed upon them, than it is to move crypto through an exchange, even if that exchange is regulated.

“The reality of regulation is that it will always be a response to what’s happening, so it’s tough to regulate elements that you know are going to exist at some point in the future.