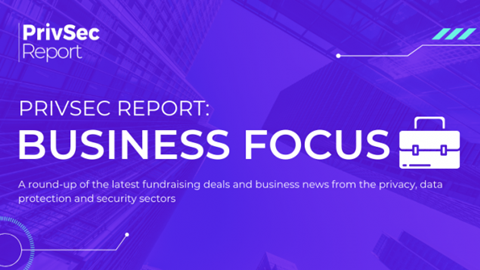 A round-up of fundraising and business deals from the privacy, data protection and cybersecurity sectors in November and December 2020.

Privacy, security and data governance platform OneTrust announced a $300million Series C funding round, bringing the total amount of money raised by the company in the past 18 months to $710 million. TCV signed on as a new investor, joining existing funders including Insight Partners and Coatue. Kabir Barday, chief executive of OneTrust said the partnership with TCV “allows us to further accelerate our mission, leverage our capital and currency to drive organic and inorganic growth, and deliver for our customers and partners long term.”

siOPTICA raised €2m from its current investors to “ramp up production of its on-demand privacy shields for all sorts of devices” The German privacy hardware startup is also planning to spend more time on computing projects and researching new privacy technologies.

A group of 12 companies and organisations have formed a research consortium to develop new tools that facilitate the protection of citizens’ data security and privacy. CaixaBank, Tenforce, Deutsche Telekom, Technische Universität Berlín, Athens Technology Center, Ipsos, Kaspersky, Vlaamse overheid, Cini, ULD, Institute Mihailo Pupin and E seniors have formed the Transparency, Privacy and Security for European Citizens (TRAPEZE) group to  a platform to register user consent for the use of their data and adjust user policies in real time.

Consent-management solutions provider Usercentrics GmbH has raised $17m in a Series B funding round, led by equity investor Full In Partners. The Munich-based company, which says it has quadrupled recurring revenue over the past 12 months, will use the injection of money to pursue further growth. Usercentrics is targeting expansion in the north American market next as it seeks to become “global leaders in the areas of consent and preference management.”

London-based Cloudhouse Technologies, which provides solutions for infrastructure and application compatibility has acquired UpGuard Core from Australian cyber security company UpGuard Inc. UpGuard Core, which will now be known as Cloudhouse Guardian, is described by the company as a “third-party risk and attack surface management platform”.

Data protection technology company eXate raised £2.3m of seed funding led by Outward VC, with additional backing from ING Ventures and Triple Point Ventures. The investment will be used to grow its DataSecOps platform, which aims to provide an environment for data, operations and cyber teams to collaborate in a single application.

Trilio, a provider of cloud-native data protection services, raised $15m of funding which it says it will use to expand its “go-to-market” capabilities and invest in product development, sales and marketing. The funding includes $12million in Series B growth equity plus $3m debt finance from Avid Bank

Startup Skyflow raised $17.5m in Series A funding led by Canvas Ventures. Skyflow offers customers the ability to store data in a zero-trust repository accessible by an API. It uses polymorphic encryption.

Israel-based Check Point Software Solutions has entered a strategic partnership with FinTech Scotland. Check Point will deliver education and training initiatives to companies in FinTech Scotland’s cluster and work with start-ups to “enable cyber security from the outset.” FinTech Scotland is an independent, not-for-profit body jointly established by the private sector and the Scottish Government.

Deepfence, a cloud-native security platform, has raised $9.5m in Series A funding. This round of funding was led by AllegisCyber with participation from Sonae IM and existing investor Chiratae Ventures.

Abnormal Security, a San Francisco-based firm that “uses AI to reinvent email security”, has raised $50m in Series B venture capital funding. The round was led by Menlo Ventures with participation from early investor Greylock. The company is using the funding to double the size of its machine learning and data science teams.

Acronis, a global cyber protection firm with its headquarters in Switzerland, has acquired Israel-based cybersecurity firm CyberLynx. Acronis says the move will enhance its “ability to be an active partner in improving client organisations’ security posture with training and consulting solutions”

Unbound Tech, which offers cryptographic key management and protection, has raised $20m in Series B funding. The firm will focus on growing its business in the enterprise sector, increasing its headcount by 30% by the end of March 2021.